Blarney Castle is celebrated the world over for a stone on the parapet of the castle and is said to endow whoever kisses it, with the gift of eloquence Walking over the wooden bridge towards the castle you catch your first glimpse at this 15th century castle in ruin. In front of the castle is a small tower, a ruin from an early castle of the 14th century. 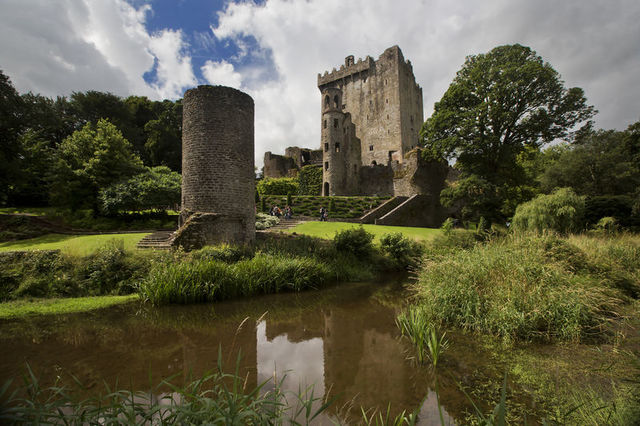 The stone itself holds an older story than the castle standing above. Cormac MacCarthy one of the great Kings of the province of Munster is said to have supplied four thousand men from Munster to supplement the forces of Robert the Bruce at the battle of Bannockburn in 1314. Legend has it that the latter king gave half of the Stone of Scone to McCarthy in gratitude. This, now known as the Blarney Stone, was incorporated in the battlements where it can now be kissed. 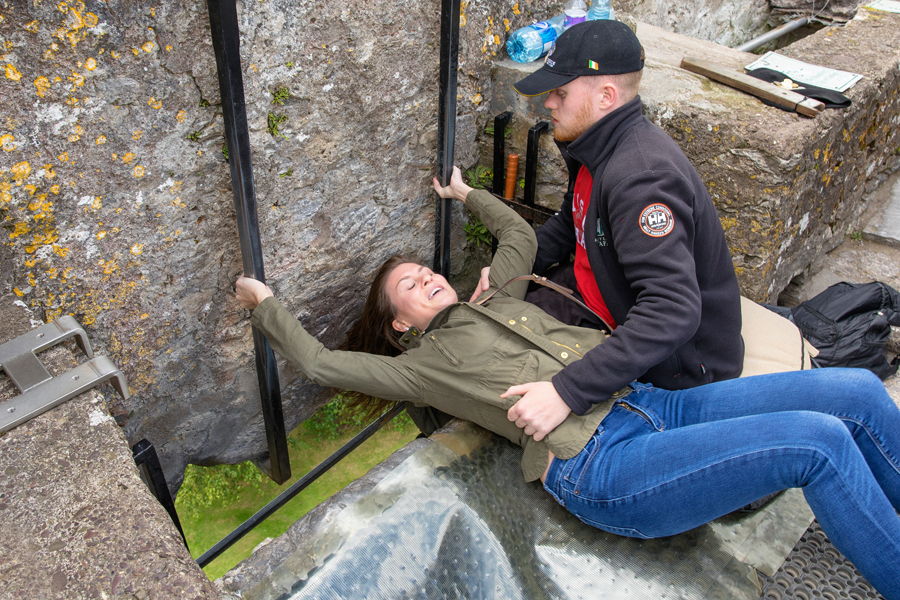 The origin of the word “Blarney” means to placate, or to deceive without offending, which derives from the stream of unfulfilled promises of Lord McCarthy to the Sir George Carew, her Deputy in Cork in the 16th Century.In the 16th Century, Ireland was in a state of flux. The English Crown expected its subjects to first surrender their property to the King where they would be re-granted to them, upon pledge of allegiance to the English crown. This was a way for the English to be able to make Irish chieftains obey and submit to English Lordship and to secure Ireland for a peaceful (Protestant) western front. It is said that Cormac McCarthy was made aware of the magical properties of this Blarney Stone by a witch he’d saved from drowning in the nearby River Martin. The witch then told him about the magical properties of this stone, which would be the gift of the gab. McCarthy used this gift when Sir George Carew, the Queens Deputy, came over to claim the estate for the crown Queen Elisabeth I. McCarthy would wine and dine the Queen’s representative, making it very embarrassing for Sir George Carew to even mention the reason for his visit. Sir George Carew would go home empty handed without any commitment from McCarthy. Upon the Queen’s query he had a lame excuse as to why the surrender of McCarthy’s castle was not dealt with. Exasperated, the Queen would later say “Not another load from Blarney” and over time this became shortened to a load of Blarney or sometimes known as “Blarney Talk.”

The McCarthy’s held onto the Castle with few interruptions until the Cromwellian Invasion of Ireland in 1660. MacCarthy heard news about the ferocious New Model Army burning and sacking villages and towns across the island. Leaving his castle, MacCarthy used the underground cave system to flee, one cave was said to go to Cork, another to the lake and the third to Kerry. It is said that before leaving the castle, he cast the family silver into the lake. The property was then acquired by Sir John Jeffries, who subsequently drained the lake and found nothing. It was all Blarney.

When entering Blarney Castle, you will notice that it is only a shell of its former glory. At the entrance, look up and you will see a typical murder hole, which would be used to repel any enemy who would want to enter the castle uninvited. These murder holes were used to shoot down into the entrance way or to drop hot water onto uninvited guests. Considering most of the knights would be wearing chainmail out of iron and protective gear such as helmets and breastplates, it would be considered dying a horrible death. When a knight was doused in hot water, he would not only burn once from the contact, but stew in his own body armour, which was now scalding hot on his skin.

Also, notice how the steps are uneven and always leading clockwise. These trip stairs were not because of poor stone masonry, but a tactical approach. When enemies would try to storm into the castle surprising the occupiers, the stairs were designed to easily trip the men and cause a domino effect. Observe the narrow staircase towers in the castle. The clockwise towers allowed those yielding their sword with the right-hand to have the upper-hand when defending down the stairs. Those trying to invade faced pillars as obstacles, which restricted arm movement. This gave the guardians of the castle a great advantage.