Starting the day with the sun rising over Dublin bay, the sea air flowing in on a light breeze, I was ready to see what Ireland’s Celtic Boyne Valley had in store. Ancient burial tombs, the largest Norman castle in Europe, the spiritual center of Neolithic Ireland, and even the seat of The High King was calling from the hills.
Driving through the countryside, my eyes were drowned in a sea of lush green landscapes. Each hedgerow weaved through the landscape, every rock meticulously placed on the stone walls like a naturally occurring mosaic. Our tour guide was pointing out the smallest details on each leg of our journey: names of trees, types of flowers, the call of each bird singing through the cool air. Every sight and sound melded into a symphony of beauty that can only be experienced on the Emerald Isle.
Arriving at our first stop, The Hill of Tara, the presence of five thousand years of tradition coursed through the very ground we walked on. The seat of power for Ireland’s High Kings predates even the Great Pyramid, remaining a watchful steward to the land as far as the eye can see. And can the eye see! The view rivals that of a mountaintop’s, allowing one to see far and wide into the countryside. From the Hill of Slane to the Dublin Mountains and even Dublin Bay on a clear day, it’s no wonder why the Neolithic Irish planted their roots atop this towering horn.

The site itself hosts mounds where the High King sat as well as a megalithic passage tomb. Ancient stone monuments are scattered around the hillsides along with the remnants of a long banquet hall, marking the entrance to this once great pinnacle of society. Atop the King’s mound sits The Stone of Destiny, a gift to the ancient Irish from the gods, said to roar when touched by the rightful king. Feeling the same stone that was so highly revered for millennia attunes one’s spirit to those that rest atop this hallowed ground. 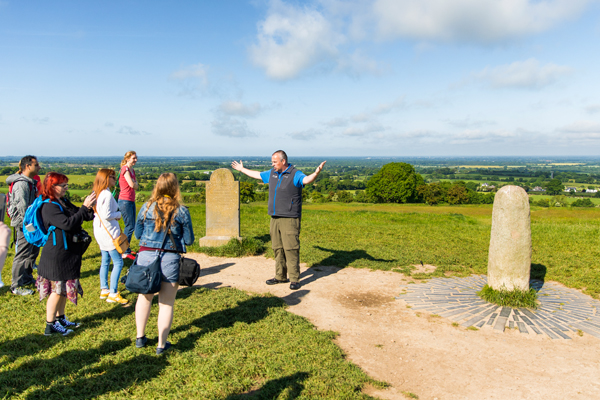 From Tara, we wove through the countryside to Trim Castle, the oldest standing Norman castle in all of Europe. Massive ramparts, rolling draw bridges, looming towers, and a pristine inner keep stand on the banks of The River Boyne. Entering through the massive gate, we were recounted with tales of medieval high society, foot soldiers and battles. Imagining swords breaking on shields, arrows flying from high atop the walls, battering rams attempting to break in huge doors and five hundred years of conflict, one can almost hear feudal life when inside this great temple of stone. 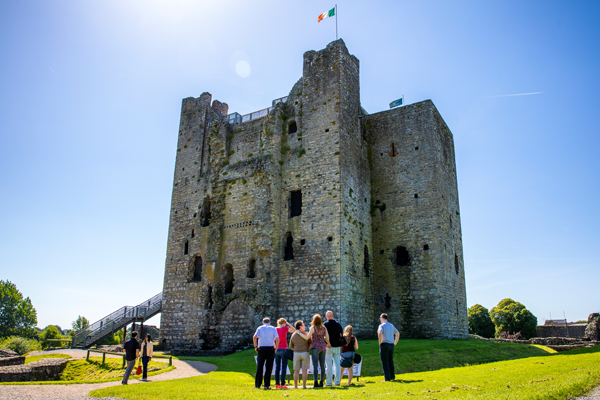 With the sun high overhead, we arrived at the foot of Slieve na Calliagh, the highest mountain in County Meath. Waiting at the top that massive green peak was Loughcrew Passage Tomb, one of four burial mounds built over five thousand years ago. As we began our ascent, the grass on the mountainside blew in the breeze like waves rippling along the coastline. Black wooden posts marked the path up, guiding us higher and higher until we reached the summit. As the light shone above, we could see every mountain range on the island. Breathtaking countryside and hills fading into the horizon in 360 degrees, truly a remarkable sight. 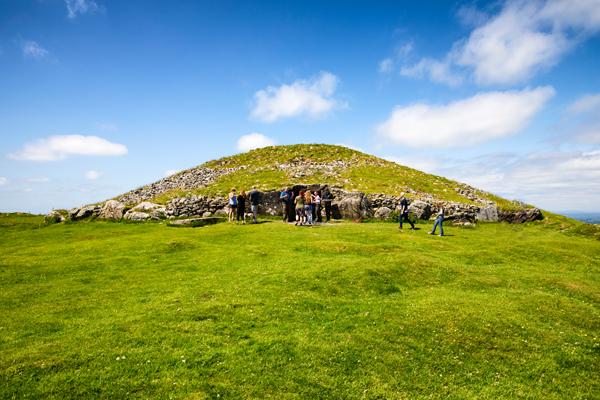 The tomb itself had a small opening in the piles of stone, just large enough for one person to fit through at a time. There, inside that ancient structure, we saw the carvings of an age past; a civilization older than written language itself. Depictions of wooden ships with tall sails and carvings of the sun paralleling an eight-petaled flower that light up only on the spring and fall equinox. With the sun illuminating the chamber, the time to harvest or plant crops is near.
At the base of the hill is a small cluster of traditional cottages turned café and historic exhibit. Owned by the same family for hundreds of years, the employees were a wealth of knowledge on the history of the land and the type of lives the rural Irish lived. Standing in an accurate representation of an early 20th century Irish thatch-roof cottage instils a sense of appreciation for how difficult life in rural farmland must have been. From sleeping in the same room as farm animals to producing every piece of food that would be consumed over the year, we gathered a greater understanding of how much life has changed in just the last one hundred years. 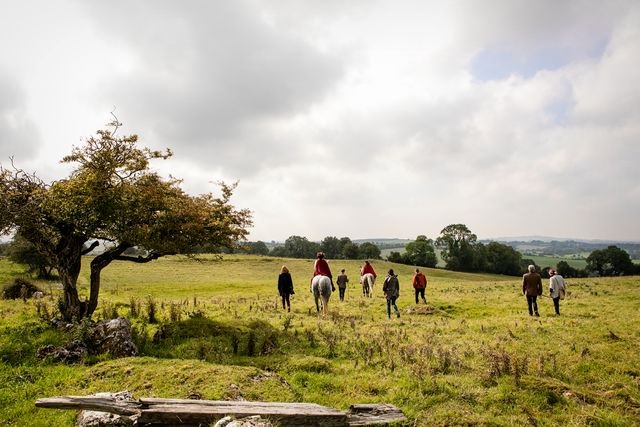 Finally, the trip was reaching its end, we stopped at the Hill of Uisneach, the spiritual center of ancient Ireland. There we were met by a storyteller, someone who knew every tale and bit of lore from the creation of the island to Celtic folktales of giants and banshees. As we sat in the shade of a fairy tree on the hill, stories of a time past flowed like the river through the valley. Gods and deities, kings and princesses, prophecies and destiny, all intertwined with nature and the reverence of the earth itself culminating in the annual celebration of Bealtaine, or the festival of fires. From across the four provinces, the old kings would come to this sacred ground to celebrate together, lighting a fire so large all of Ireland could see it. Cleansing their spirits and appeasing the gods that had blessed them with so much, there was no greater celebration for the ancient Irish.
With the day ending, we arrived back in Dublin. It was surreal to see such a large and bustling city after traveling through time to some of the oldest historical sights in the world. The quiet breeze and singing of birds replaced by the chatter of the streets and the honking of horns. Although it had only been a few hours, I still felt as though I was thousands of years away.