Ireland was known as the Island of saints and scholars after the Island was converted to Catholicism by our patron Saint Patrick. Many monasteries were founded and some fantastic Abbeys were built by local chieftains and lords. The monks produced some fantastic manuscripts and books the most famous being the Book of Kells now on permanent show in Trinity college. There are many other fine examples on show in the Chester Beaty library and the national Library. The monasteries also housed ornate religious treasures and attracted the attention of the Vikings when they raided the country in the 10th and early 11th century. This led to the building of high towers in an attempt to take refuge from the marauding vikings these high towers are a feature in many of the older monasteries spread through out the country. There are too many Irish Abbeys and Monasteries throughout the country to include them all but I will highlight some of the best examples.

Located in the Wicklow mountains in a picturesque setting in a beautiful valley on the banks of a tranquil lake. This Monastery was founded by Saint Kevin in the 6th century and became a very popular place of worship. Kevin attracted many followers with an interest in spirituality and this monastic settlement thrived for centuries. Despite many attacks by the vikings in the 10th century the Monastery survived and thrived until 1214 when it was destroyed by the Normans. Most of the existing buildings that are on view date from the 10th century through to the 12th century. The best preserved buildings are saint Kevins Kitchen and the round tower which towers 33m high, all the other buildings in this vast site are in different states of ruin. A visit to this site is a must for anyone in the Dublin region. The monastic ruins are fascinating and well worth exploring but the setting of the monastery is what will enthrall you. Allow yourself time to explore the beautiful landscape . There are many marked walks that will bring you around this most scenic of areas. You will understand why this area is called the garden of Ireland 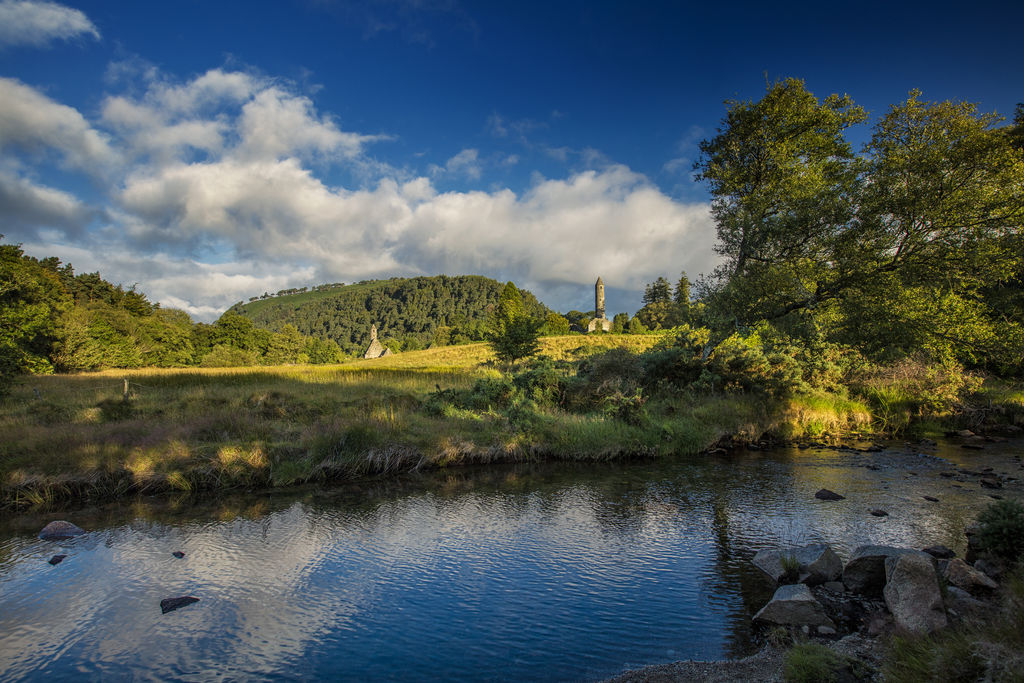 Situated in the Burren region in county Clare Corcomroe Abbey was founded in the 12th century by King Conor na Siudane Ua Briain for the Cistercian monks. Since it was built after the times of the vikings it does not feature a round tower. It is famous for its ornate carvings which are not typical for an Abbey of this period. There is a story that the tradesmen were put to death on completion of the structure so that they could not build another to rival it ( hopefully this is only a myth). The Abbey is built in a cross shaped design but is now in a ruinous state. Many features and carvings survive including the entry arches and outer moldings. The building also houses a tomb effigy of King Conor and is one of the few remaining effigies of Irish chieftains in Ireland. The setting of this monastery in an isolated area gives an insight into how these monks lived. They were self sufficent and lived a simple life away from the influence of society, this monastery was active for approximately 400 years. The last Abbott was Revd John O’Dea in the year 1628. We visit this Abbey as part of our cliffs of Moher tour.

Situated in the heart of Connemara Kylemore Abbey was not originally built as an abbey but as a private dwelling. Mitchell Henry commissioned the building in 1867 after his wife fell in love with the region. It is understandable to see how she was inamoured by her surroundings and this is one of the most beautiful settings imaginable. The House was purchased by the Benadictine Nuns in 1920 after they were forced to flee Ypres in Belgium during world war 1. It was a boarding school for girls until 2010 and is still a benedictine  Abbey. The Abbey is open to the public who can do a tour of the house and gardens. 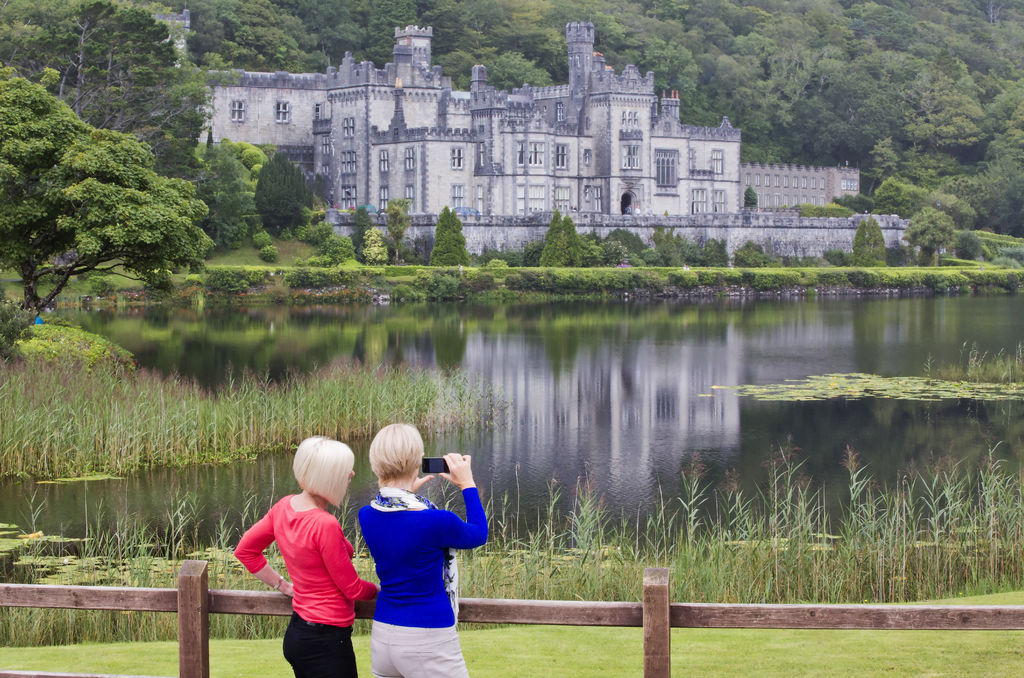 Monasterboice monastic site is situated in Co Louth in the famous historic region of the Boyne Valley. It was founded in the 5th century by Saint Buithe. The surviving buildings and ruins date to a much later period, The Round tower which is the second highest in Ireland dates to the 10th century and the two churches date to the 14th century. Monasterboice is most famous as the home to Ireland’s best preserved high crosses the High cross of Muiredach is 5.5 meters high and has intricate carvings depicting biblical scenes one side has carvings from the old testament while the other depicts scenes from the new testament. The West cross is 7 meters high and is the highest in Ireland and also has biblical carvings depicting scenes from the Bible. 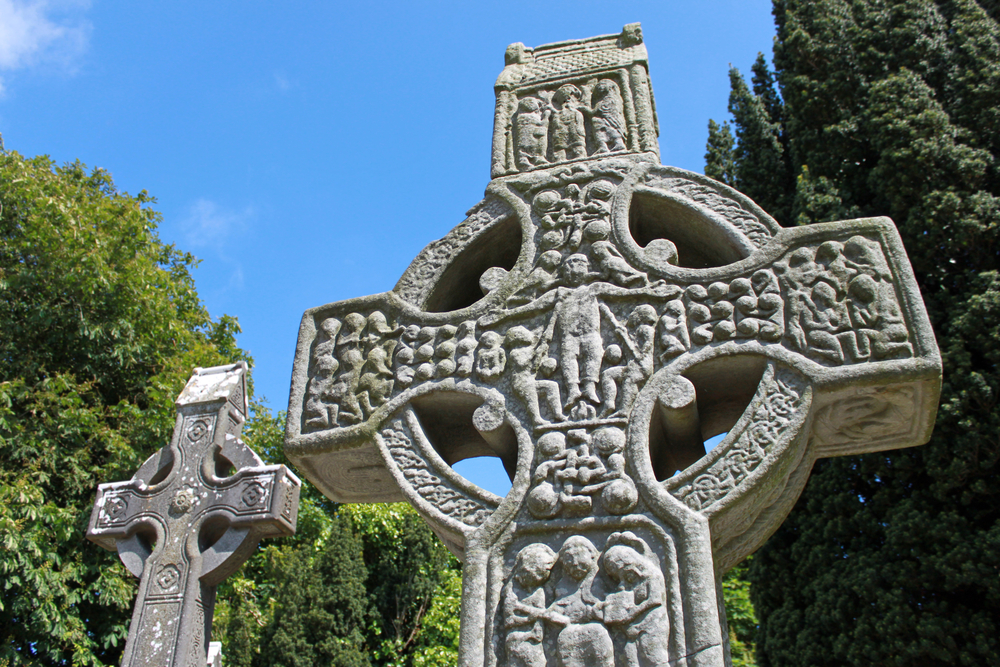 The Monastery of Clonmacnoise was founded in 544 by St Ciaran and  is situated in County Offaly. The site is extensive and has seven Churches two round towers and a number of high crosses all in different states of ruin. The buildings range in age from the 10th century to the 12th century. The 3 Celtic crosses are carved and replicas are now on the site. The originals are in an interpretive center built in 1993 , You can learn about the life of the Monks and view artefacts found in archaeological digs including the original 3 high crosses brought in to save them from further erosion. 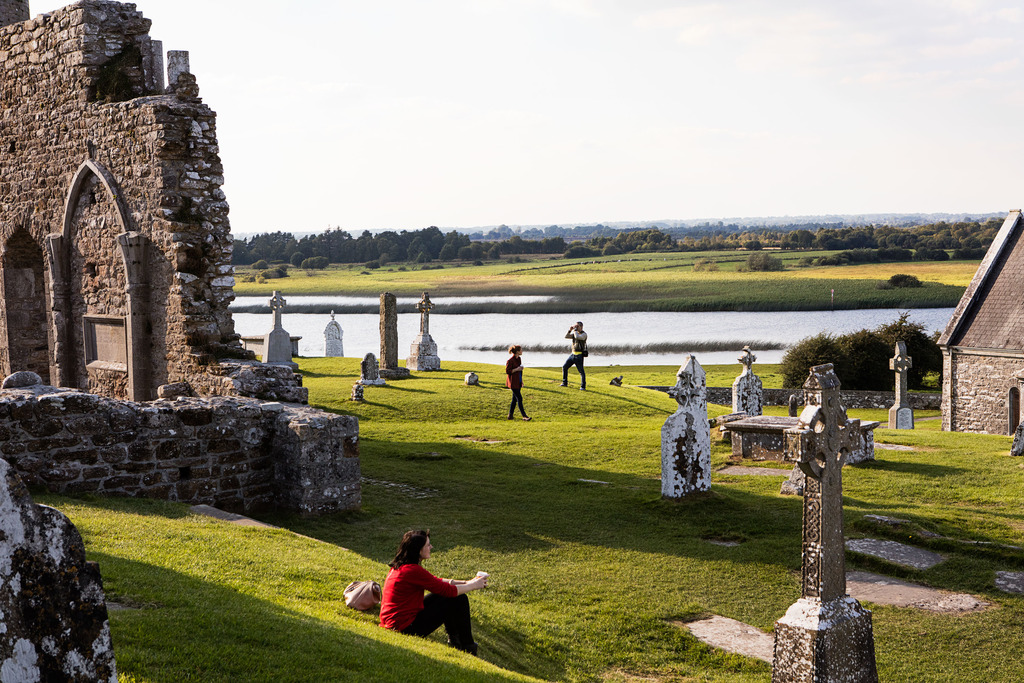 The Rock of Cashel situated in County Tipperary was not built as a monastery but as a fortress and was seat of the Kings of Munster. It was signed over to the Catholic church in the 13th century. The buildings on view today date to the 12th and 13th century and are in very good repair. There is a mix of architecture between Romanesque and Gothic. Cormacs chapel is viewed as the best preserved example of Irish Romanesque architecture with an influence from German design. this is seen in the two towers. This is a very well preserved structure and would have been even better preserved but for the sacking of the fortress by confederate forces in 1647  The Rock of Cashel is home to ancient tapestries and exhibitions that can be seen in the restored chapel. 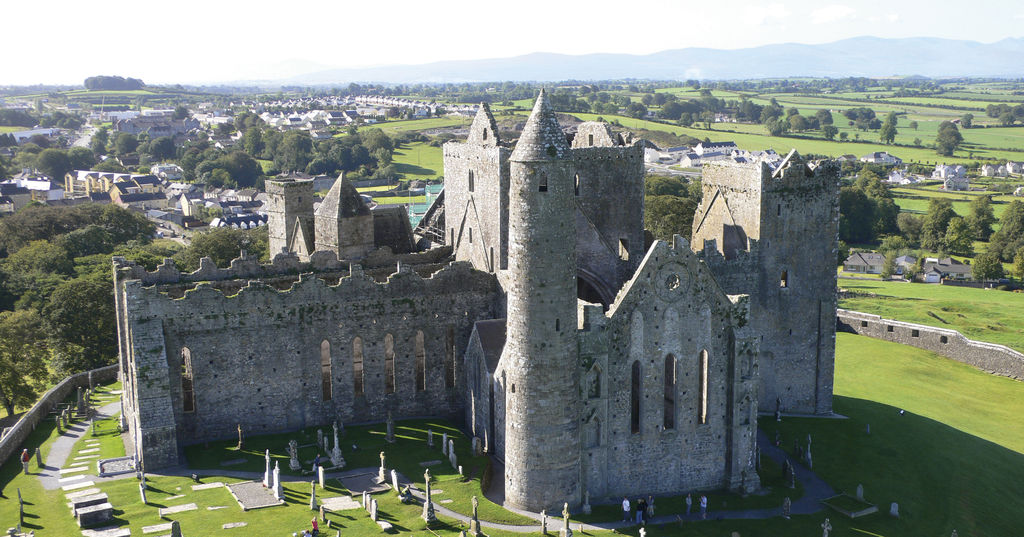 Skellig Michael is situated off the coast of Kerry and is now a Unesco world heritage site. It is home to an ancient monastic site dating to the 6th century. The beehive shaped huts are still in very good condition and the remote setting is nothing short of stunning. The monastery is on a tiered system  and you get a feel for how the ancient Monks eked out an existence on this Barren Island. They were self sufficient and had to invent a system for collecting and filtering water as there is no flowing water on the Island. This has become a top attraction in Ireland after featuring in the latest star wars movie. 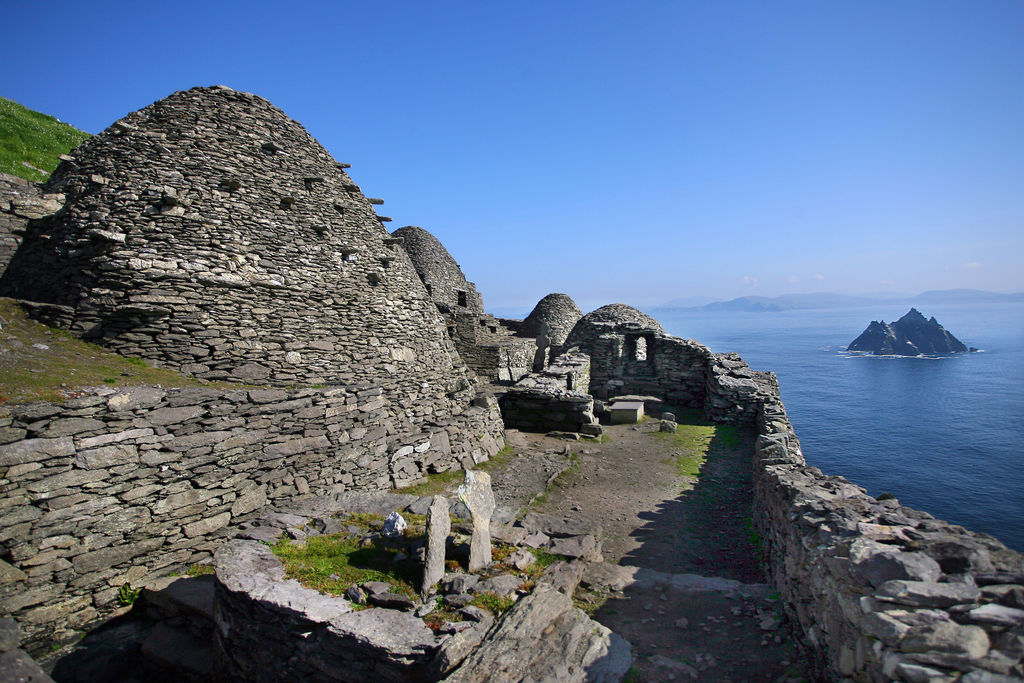