Dublin To The Cliffs Of Moher

Dublin to The Cliffs Of Moher For an Eventful Day 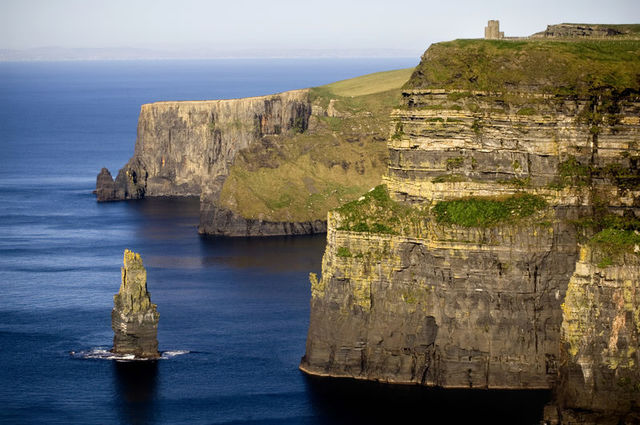 I am travelling across Ireland towards the west coast to The Cliffs of Moher. Morning fog blankets the fields and obscures the horizon. From Dublin, you travel essentially across the country from east to west. The Emerald Isle is filled with fields, farms, churches and quaint homesteads. As daylight is yet to break, lights twinkle out through the blanket of fine mist.

The landscape is green as far as the eye can see. At this time of year cattle are not often found out in the fields. They are kept inside sheds within the properties to protect them from the elements. Sheep can be seen, their woolly coats protecting them from the cold. Many are due to give birth soon and there are tiny lambs visible in some fields, staggering slightly on the legs they are not quite used to yet.

In this part of the country there is a connection to Barack Obama, with the connection something which appears to instill pride in the locals through Obama Plaza. Yes, that is its name. It has been built in the town of Moneygall and is Barack Obama’s ancestral village in Ireland. He has visited this location and the photos are displayed on the walls for visitors.

What a ruggedly beautiful island this is. Greener than you can imagine, with a landscape that stuns visitors and a climate that is often grey and wet. Dotted in amongst the landscape are ancient walls, graveyards, churches and castles. They are remnants of the past that are still standing; they have survived for hundreds of years and remain attractions for tourists visiting Ireland.

The cliffs are majestic as they jut out into the Atlantic Ocean. The vertical cliffs rise to a height of 203 metres. O’Brien castle stands watch across the ocean, a grey stone tower which has the advantage of panoramic views. In historical times, such views were an important aspect of defence. The weather today is perfect for such a visit. It is dry, not too windy and not overly cold. The waves crash powerfully against the rocks below and I watch as a wave comes in towards the rocks. It almost seems like its motion is slowed as it gracefully reaches its breaking point.

The walk along the coastline here is via a path beside the cliffs, a path that is often wet and muddy. Wear good hiking shoes and you won’t have any problems. It is well worth the walk, the scenery is a stunning reminder of nature’s wonders.

It is a surreal experience to walk toward the cliff edge along the path. Part of it is briefly protected from the elements. One side is protected by the wall and the other side by fields. There is a sudden silence – the sound of the wind is reduced, there is nothing heard but the birds close by, other visitors and your own footsteps. When you emerge from that brief uphill walk, the wind starts up again like an orchestra building to a crescendo.

Here the walk gets slippery; I wore shoes with good grip but still slipped a few times on the muddy soil. There are warnings to stay on the path and not cross the wall to the other side due to the risk of landslides.

The Cliffs of Moher are arguably one of Ireland’s best sights and an example of nature at its finest. The wind hits your face, the sheer size and beauty astounds you and you take in the experience of viewing Ireland’s rugged coastline and look out to the ocean crashing against the cliffs below. It is unforgettable and one of my personal favourite places that I have seen in Ireland.

The landscape of small Irish villages is charming. During lunch in one of these quiet villages, a coastal village named Doolin, I reflect on my day so far. I am enjoying lunch while listening to Irish music inside the pub. Doolin is a sleepy village; there are several accommodation options and a few shops and eateries. Everything bar one pub is closed and this is where I have lunch, enjoying the peaceful surroundings. Closed shops indicate it is low season and it most certainly is in mid-January. At present it is almost deserted – a ghost town. The little village however is well known for its traditional music scene, with three of the pubs having regular music sessions which enthral visitors. 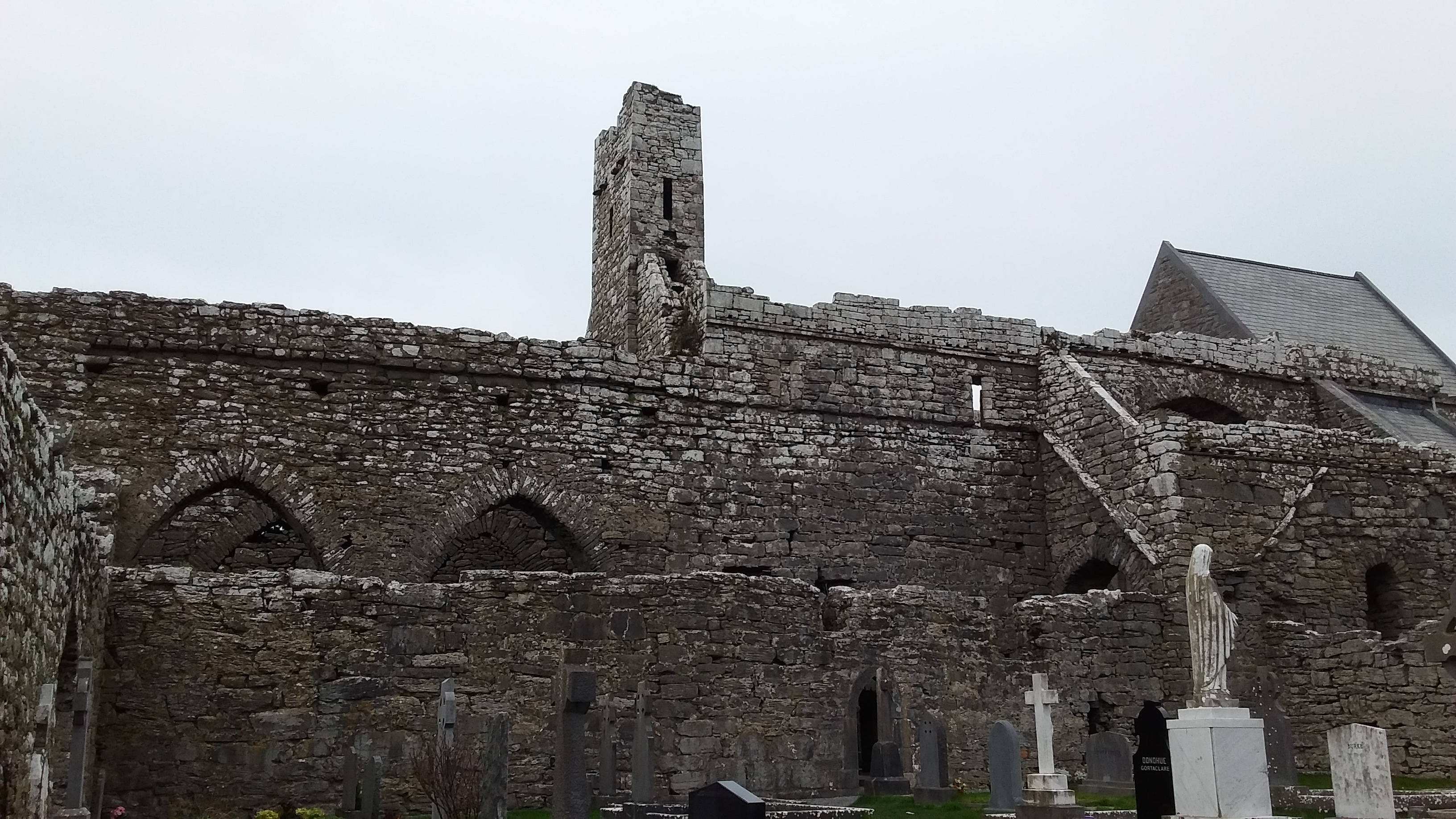 The Corcomroe Abbey is located in the Burren region in County Clare. It is a Cistercian monastery from the 12th century. The outer walls and part of the roof still stand and feature fine stone carvings. Outside the abbey, it is the graveyard and the headstones which capture the eye. In the low season, the abbey is silent, there are no visitors but ourselves. There is an almost eerie silence at first when you consider the age of the building, the gravestones inside and the graveyard outside the abbey. I am not sure I would fancy being here after dark, but it is this calm silence and lack of evidence of tourism that lends itself to the atmosphere of Corcomroe Abbey. It is a well preserved example of the architecture of the time. The weathered stones exude a sense of history and the carved ceiling that remains is impressive. It has also been known as “St Mary of the Fertile Rock”, which refers to the fertile soil in the area. The surrounding area is very green indeed, as are the grounds of the graveyard inside the abbey grounds. 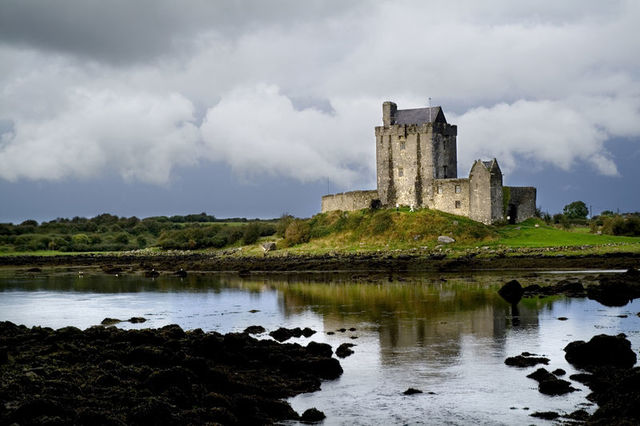 A small stop along the way is Kinvara, a sleepy little town with charming colourful shops right on Galway Bay. Located here is also the impressive Dunguaire Castle. The castle was built in 1520 by the Hynes Clan tower house and is named after the king of Connacht. The castle has been restored and boasts a 23 metre high tower. The castle is located in a picturesque location on Galway Bay surrounded by the greenery which Ireland is so well known for, the stunning bay and the charming village of Kinvara. Today, visitors are treated to a truly impressive spectacle. Ireland is home to many castles – many sights of great historical significance and they are highly photographed by visitors.

Book your Cliffs of Moher tour from Dublin